Trench 14 is actually a combination of two earlier trenches: 8 & 11. 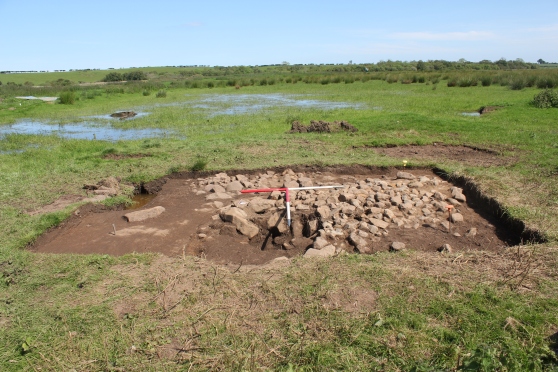 Trench 14 and the stone feature within it.

A quarter section was dug out to determine the depth of the mound, and we discovered a thin layer of peat under which lay a brushwood platform. As the season ended, we backfilled the quarter section and left it to future investigations.

Trench 11 was opened in 2015 in an attempt to further understand the stone mound feature by examining the surrounding area, as well as determining if any relationship existed between Trench 8 and the western end of Trench 9 – where a large post was discovered in situ at the end of season 2015.

A paleochannel with layers of sand and brushwood was discovered at the southern end, which was less than a metre from the north end of Trench 8. One side of the channel edge looked like it may have been cut intentionally though further investigations are required to determine if that was the case.

Also within the trench, we discovered over 10 pieces of wood around 6 cm wide & ranging from a half metre to one metre in length lying within the peat layer. Two had potential cuts in them, giving us an indication that at least a couple of them were used by early humans.

So far this season…

We have expanded Trench 14 to include both Trenches 8 and 11, and are in the process of expanding the quarter section to give us a fresh understanding of the stratigraphy of the artificial stone mound and the brushwood platform lying under the peat layer. We also plan to expand the trench into the western edge of Trench 11 to understand if a relationship between 8, 9, 11 and 14 exists. Our plans are to extend into the palaeochannel to determine if it was cut intentionally and to excavate at least partially into the edge of the peat layer to discover if more worked wood exists.