Digging around the archives, we came across a number of lovely bone dice! Not enough for a game of Yahtzee, but we’ll take what we can get…

Our dice all are made of animal bone, polished smooth, with incised ring-dot or ring-ring-dot markings for each face. The incision is a common decorative technique using a hand drill and found on all sorts of objects across time and space, and, when they represent numbers on dice, they are called pips which seem to simplify over time to single dots. Dice games are known to have existed since the Neolithic in Scottish contexts, but actually started as other thrown objects probably associated with fortune-telling and, later, gaming using four sides of a sheep’s “knucklebone” (more of an ankle bone). The Romans loved dice and used large and small variations; the Egyptians are believed to have the first 20-sided die (for you DND fans) during the Ptolemaic Period. Dice would have been extremely popular ways to pass the time and hopefully win something valuable during the Roman and medieval periods.

Modern dice have opposite faces that add up to 7, so the faces would be paired 1-6, 2-5, 3-5. Early dice were not perfect cubes, and in the medieval period they may have had opposing faces that added up to prime numbers: 1-2, 3-4, 5-6. Some medieval dice had repeating numbers and were rolled in pairs: one die had 1, 2, 3 on two faces each, the other with 4, 5, 6. Dice are rare in the early medieval period but often in the 7 configuration we are familiar with. They usually reappear in the archaeological record in our area in the 12th century in the primes system. Standardisation only becomes fashionable at the end of the medieval period around 1450 when they move back to the 7 configuration. Check out this open access article comparing late medieval dice in the Netherlands and UK.

Some of the dice we have on display in the castle may have been “loaded,” primed for cheating, one method of which involves weighing one face with a drop of mercury so that the opposing face turns up more often. For more on an assemblage of dice including several cheat dice, check out this brief piece from Fordham’s Medieval London project. We haven’t done a proper statistical analysis of the rolls of any dice from our archive yet, but we may have rolled a few for bragging rights in the windmill. There was no clear run of luck for any of us, which must be a good thing.

Let’s talk a little about the dice we pulled from the archive. Because the early records of the dig are not all digitised, we could only access summary spreadsheets from our office in the windmill, so we unfortunately don’t have as much information about the contexts as we would like. This is absolutely something we can revisit as we reconcile records in the archives! All but one of the dice are associated with a single context in the centre of Trench 3, and the outlier is actually from a context just below the one in question, both part of the medieval to late medieval midden.

The first die is actually in two pieces discovered on separate occasions in the same area in 2004. SF1549 (meaning “small find number 1549) is a broken quarter with the only complete face showing a 1. SF1556 is another rough quarter showing part of side 5 and part of side 6. When put together, side 5 is complete. The 1 side is opposite the partial side 6, which tells us this is a die in the 7s category. The pips are double-ringed dots. The hollowed inside of the die shows no sign of tampering.

SF1756 is much smaller, but also a 7s die. It too has a double-ringed dot motif for the pip, and there is no obvious cheating mechanism. This was found in 2004.

SF6394 was found in 2009, associated with the same context as the others. It also has opposing faces that equal 7 and a double-ringed dot motif. There is also no particular penchant for landing on a particular number when rolled.

The last die we pulled was SF1896. This one was found just under the context where all the previous ones were found. This die is not even close to a perfect cube, as it has only two square faces: sides 1 and 2. The shape may have been why side 1 and side 2 tended to face up more often than any of the narrow rectangular sides. The incised pips are a single ring and dot. York Archaeology (formerly York Archaeology Trust) has a wonderful gallery with a similar rectangular die that seems to also have the 1 side on the square face. Our die is the only one in the primes configuration we have found so far digging through the archives, so there’s a chance this is earlier than the 7 configuration dice, that otherwise are expected to be late medieval. This context was under the context of the other dice, which by the law of superposition suggests that what is deeper in the stratigraphy is earlier (few examples exist of this rule failing in archaeology).

Care to try your luck?

Our apologies for a short post today. We have a number of blog ideas on the docket, but end-of-season tasks are limiting the amount of time we can spend writing and configuring photos for the blog.

However, in order to leave you with something to tide you over for the day, Kirstie, our Finds Supervisor, suggested we post a few photos of two of our nicer “shiny” finds from yesterday’s cleaning of Trench 3.

Carved bone bead (note the small etchings on the side)

And here are a few photos from yesterday’s exciting venture with the octocopter. More to come on this.

Have a great evening everyone!

This Saturday, the 21st of July, the team here at the Bamburgh Research Project had a visit from the three winners of the ‘Dig at Bamburgh Castle’ competition in Young Archaeologist Magazine. So first off, the BRP would like to congratulate Clare, Eleanor and Lucy for their winning entries to the competition. As blog followers will know, sunshine and warmth have been sorely missed at Bamburgh this year, and we were happy that Clare, Eleanor and Lucy brought some beautiful weather with them.

We started the day with a trench tour led by director Graeme Young.

The girls learn about the enigmatic Trench 1.

From there we went up to the windmill, and investigated some of the ‘shiny finds’. Oh, and we gave away some prizes!

And then we got down to some digging. I’d like to say that the conditions were right for small finds, that the girls got lucky, or that we saved a particularly nice context for them to excavate (#3241 for those playing at home) but the sad fact of the matter is that Clare, Lucy and Eleanor were just better than us. Period. 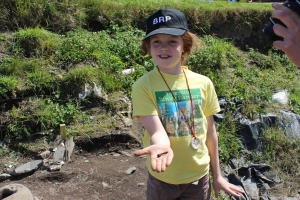 Eleanor with her iron brooch pin. 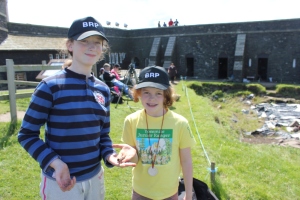 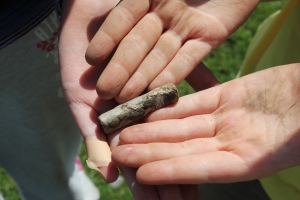 Clare and Eleanor with the rolled lead. 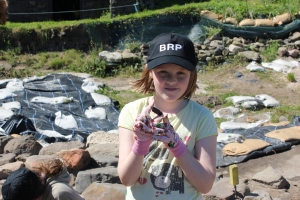 As you can see, the Young Archaeologists tried their hardest to put our Grown-Up Archaeologists to shame. They excavated an array of beautiful small and shiny finds, and seemed to have a great day doing it. The Bamburgh Research Project had a great day with the girls, and we look forward to continuing the competition in the future.

If you or someone you know is interested in joining the Young Archaeologists Club, visit their website at http://www.yac-uk.org