As the level of Brian Hope Taylor’s 1974 excavations gets tantalisingly close, Trench 3 staff continue the process of gradually joining our excavations to his.

This is achieved through the removal of features and contexts which are stratigraphically higher in sequence including a stone wall (possibly 9th Century) last week, underneath which a number of finds were discovered. Our progress is described in the video below.

Last week’s main focus was on the north-east corner of Trench 3, as we were investigating the possibility that the area is in fact a Romano-British occupation layer. Questions have been raised recently about whether our previous identification of the area, as currently dating to around the 9th Century (believed so due to the beam-slot cut of our 9th Century Anglo-Saxon timber building) no longer holds, due to a large number of Roman finds appearing both this season and ones previously. This is not typically a cause for reinterpretation as artefacts from earlier periods do appear from time to time in negative features, such as pits and post-holes, but these were also appearing in normal stratigraphic layers. These finds include a section of a Roman glass bracelet, both Roman greyware and Samian pottery and, from a previous season, a Roman fibulae brooch.

Part of the collection of Roman finds from the NE area of the trench.

To add to our current mystery, this area is cut by a number of negative features, which is making this puzzle all the more exciting to figure out. We have discovered a 9th century timber beam slot, an anglo-saxon post-hole, a high medieval pit and another possible anglo-saxon pit all in this corner. It is also difficult to see a relationship between the dated areas of the trench and this corner because there is a large WW1 test latrine pit isolating it on one side, it goes into our trench edges on two more, and finally it backs onto a higher portion of bedrock on the last. Finally towards the end of the week a stone linear feature was seen in the section of the beamslot and so work began to investigate it, which led to us reaching bedrock around 0.35m below our current level. This could give an explanation for why this area was occupied before the areas with lower bedrock levels, however more investigation is needed before we rule out any other theories.

In this video trench Supervisor, Graham Dixon, discusses the progress thus far and the plans for the weeks to come.

And a bonus video – a closer look at the small pit feature which yielded the decorated piece of Samian ware.

Stay tuned for our next video updates – coming soon!

Week two was in stark contrast to the week before in terms of weather. Where previously we had beautiful sun, week two featured persistent cloud, broken by drizzle and rain. However, contrary to what you might, think it’s been great weather for doing archaeology! The weather has allowed us to identify context boundaries features in trench 3 which were not previously visible.

Work has started on re-excavating Brian Hope Taylor’s Trench 1. This excavation lies partially underneath our access ramp. This was done to see if there was evidence of a pebble surface which appears elsewhere on site. No pebbles were seen, however in their place the section revealed a medieval pit which had previously been obscured. It turns out that both Brian Hope Taylor and excavations in 2009 had missed this feature, and it only came to light this year. A reminder of how changeable the soil can be across different conditions!

The section showing the medieval pit, the edge is marked by the stone inclusions.

Over in the north-west area of the trench work has continued on the stone feature laying on a burnt deposit just on the bedrock. This has now been half-sectioned and revealed a further sandy band directly underneath the stones. Our initial interpretation of this is that it may be a supporting post pad for a structural timber, sat on top of a consolidating layer.

This week has also seen us finish the high medieval pit in the north-east area of Trench 3. This feature was spotted at the end of last year, and appears to have been cut from higher up in the stratigraphic sequence. Previously found in the pit was High Medieval green-glazed pottery. While completing the pit this year, and interesting lead object was discovered. Ideas about its use are varied. While it looks somewhat like a pendant with its curled loops, this piece may also be a medieval treasury tag, or a rough out for casting. Investigation and research of the artefact will continue this week. 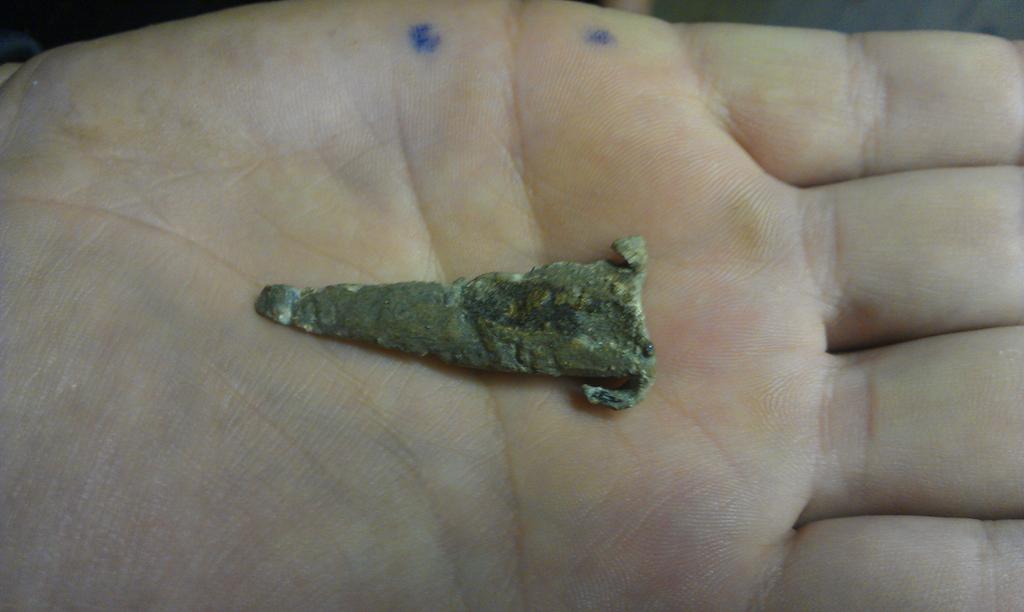 In the first castle video interview of the season Graham Dixon, Trench 3 Supervisor, discusses his initial plans for the 2016 season and briefly describes the trench.

Stay tuned for further videos and updates here and on our YouTube Channel as the season progresses!

Sometimes the most fascinating aspects of archaeology are those rare moments when you get to connect to a past event through a discrete little discovery. Whether it is the finger prints of a potter on an ancient pot or a personal object lost by an individual, it is all part of a rich tapestry of reconstructing the past.

We have been cleaning the south west corner of Trench 3 in order to record it a final time before we cover it to prevent its slow erosion. We made one of those small discoveries in the process. Bamburgh lies close to the beach and can be pretty windy. Its particularly annoying when the wind blows sand over our cleaned surfaces, adding a thin layer that has to be removed. It was amusing then to find such a thin layer of blown sand within the stratigraphy. Just a few millimetres thick separating accumulated waste lenses in the surface to the south of the 9th century metal working building. That must have been a stormy day in the early 9th century!

Over the past week, excavations in Trench 3 have focused on the SE corner, where the 2009 sandbags were removed to recover the section sides. Students have worked diligently to excavate the early medieval layers upon which the 2009 sandbags were sat. Long time followers of the blog may recall that Trench 3’s metal working building is located in the SE corner. While most of the metal working building was removed during the 2012 season, some of the foundations remain. Seeing as the SE section edges lay just south of the metal working building, we hoped that our recent excavations in this area might shed additional light on the building and its surrounds features. 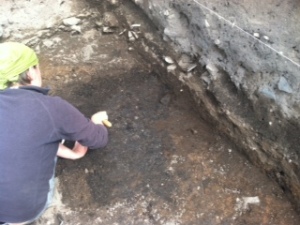 Thus far, we have discovered that directly south of the metal working building sits a rather thick burning deposit. We believe that this deposit is the result of the repeated dumping of burning material, creating layers and patches of light to mid-brownish orange, dark brownish-red, and black burnt material. The burning deposit is amorphous in its shape and varies in thickness. While at this time we can only speculate that the formation of the burning deposit is associated with the metal working building’s industrial processes, finds from the deposit, such as iron nails and other iron objects/debris and slag, further support this speculation. Additional finds from the burning area include pottery (possibly Middle-Saxon or Norman?), a lead object, a copper pin, burnt animal bone, and burnt shell. Additionally, two post-holes have been discovered today, just along the edge of our area of excavation—one to the southwest of the metal working building and one to the southeast. 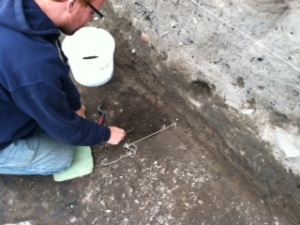 Farther to the southwest of the metalworking building, students have been excavating the remains of a large dumping context, lovingly known as (3241). This context once covered much of Trench 3 and was well-known for being rich in large animal bones, as well as small finds of various materials. This season, small finds from this context have included several stycas, several iron objects/nails, and two flint fragments.

We expect to finish excavations at the edge of the SE corner tomorrow, as we are nearly level with our 2014 area of excavation. After the SE corner has been photographed and planned, and the new layers have been added to our previous section drawings of the trench walls, we will finally begin the process of tarping and stonewalling the section sides so that they are preserved for future seasons.

One of our recent blog posts discussed the removal of a mortar floor surface in the northwest corner of Trench 3 at Bamburgh Castle. This surface has been a fixture in the trench for quite some time, so everyone was hoping for great finds from fill underneath. We were not disappointed. Amongst the usual artefacts of animal bone, shell, and charcoal we recovered the find of the week: a bulky iron buckle. Personal items such as this are a rarity in our trenches and there has been quite a bit of excitement surrounding its discovery.

The corroded buckle was recovered in situ by one of our students Isabelle and it has been dated as Early Medieval due to its context and association with Anglo Saxon pottery found nearby.

At a hefty 85 grams and measuring 7×6 centimetres, this isn’t a delicate fastening, but a seriously sturdy buckle that might have been worn in conjunction with vocational clothing. Though it’s possible that the iron corrosion hides some ornamental elements, at this time the buckle appears to be unadorned or missing its decorative portion. Because it’s fashioned from iron rather than a more precious metal it’s likely the buckle was utilitarian in nature and not a part of a high status wardrobe. Even if it didn’t belong to King Oswald, this latest find from Trench 3 is a very interesting artefact and we’re looking forward to seeing what additional finds are recovered from this area of the trench.

Having removed the mortar floor surface in Trench 3 we have been trying to excavate the construction slot along its west side, as we previously excavated the one on the east side. It has proved to be very difficult to trace at times, but we need to excavate it to separate the finds from its fill from the finds within the layer that lies beneath the floor surface next to it.

Beneath the mortar floor layer. The west constructon slot is under excavation in the foreground

We still have some questions unanswered, such as: Was there a construction slot on the south side? But having looked for evidence for this diligently for some time, and not being able to answer this question, its time to move on. We should see a new north west corner emerging next week. 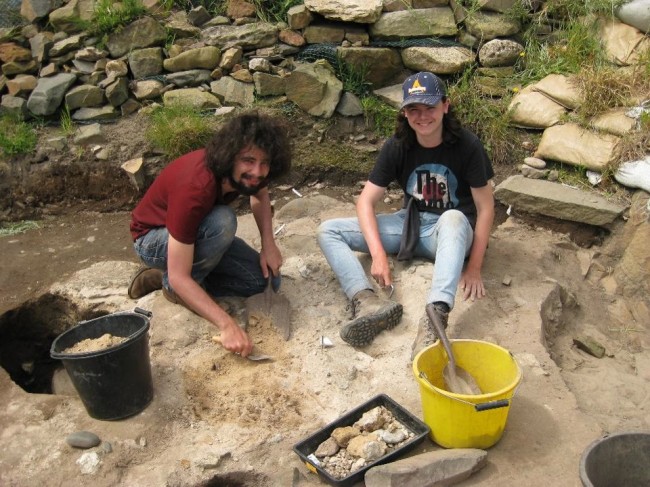 Meanwhile, work also begun in the SE corner of the trench to recover the section sides disturbed by the 2013 off-season pipe installation. First, the sandbags from 2009 where removed, revealing beautiful, straight section edges! The sections were then cleaned to reveal the preserved stratigraphy. The medieval midden layers, excavated in previous seasons and known for their later medieval small finds, as well as two sandy abandonment layers and layers from Dr. Sharp’s time and Lord Armstrong’s time at the castle appeared quite nicely in the stratigraphy. Once the section sides were photographed, students began section drawing—a large undertaking! 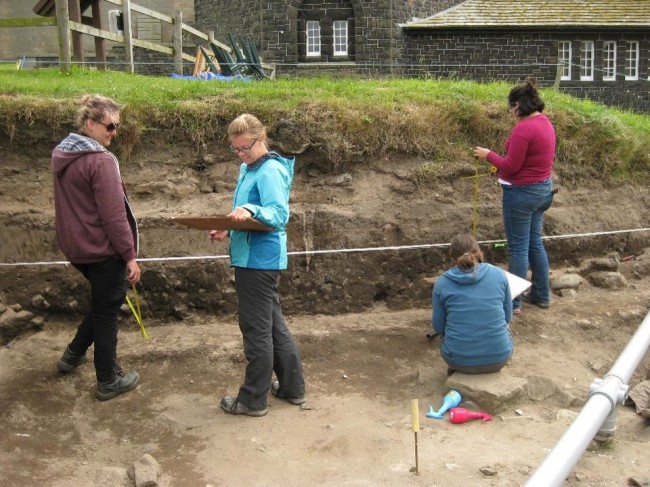