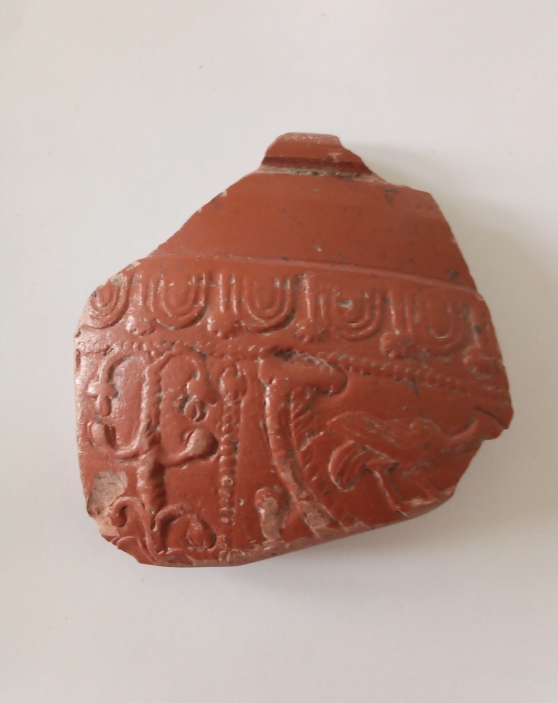 In keeping with our Roman theme from yesterday, our Way Back artefact is this lovely bit of Roman pottery. It is known as Samian Ware or terra sigillita, an orangey-red often slightly-shiny type of pottery found throughout the western empire from around the late 1st century BC to the 3rd century AD. Samian refers to island of Samos, a Greek island where is supposedly originated, while the Latin name means “sealed earth.” Much of the Samian Ware we find was actually imported from manufacturers in the southern parts of Gaul, a region that corresponds to modern France and the western Rhineland of Germany. Some Samian ware is made on a potter’s wheel but the decorated type, like our piece, is made in a mould; either way they are then dipped in a fine slip (watery clay, kind of creamy to the touch, used to decorate vessels or bond ceramic parts) before being fired in a kiln. 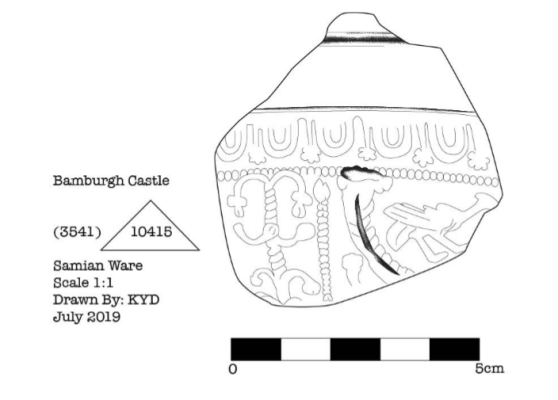 We at Bamburgh sit between two walls…the stone forts and milecastles of Hadrian (started in 122AD) and the turf of Antoninus (started 142AD). This is truly a frontier zone for much of the Roman presence in Britain, so we can’t say for sure that our artefact belonged to a Citizen of Rome (capitalized as such because that was a strict legal status that afforded certain rights) or one of the Celtic-speaking peoples that lived in and around what became Bamburgh. There was certainly interaction, which we know from both archaeology and Roman primary sources, but the extent of the Roman presence and/or Roman merchandise diffusion at Din Guaire/Din Guayrdi (which is the name derived from Brittonic that scholars have projected back onto the site before it was named for Bebba around the turn of the 7th century…the origins of the Welsh-ish name is a whole other can of worms, to be honest) is still a bit of a mystery.