Before you read this blogpost, it is imperative you open this song in another browser tab to truly experience this post of bittersweet mourning and absolute elation that the trench is truly done.

About twenty years ago, the Bamburgh Research Project opened a trench in the northern end of the West Ward. It was one of the first trenches (along with trench 2) we opened in the Castle. The spot was chosen to focus on the early entrance to the Castle and hopefully trace the sequence of fortification in the outer ward, as some of the Norman wall was still extant. Saint Oswald’s Gate would have been the entryway during the Anglo-Saxon period, but became more of a back door during the Norman period. The archaeology in the trench was a bit shallower than trench 3 (our last remaining open trench), due to the bedrock and associated boulder clay exposed by erosion and centuries of use. 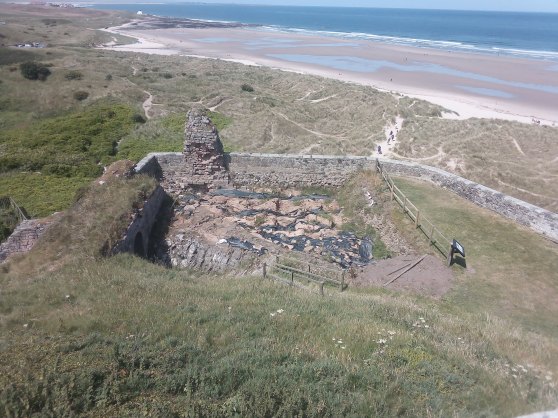 Even though the bedrock was a starring character in the story of the trench, there was evidence of slots cut into it along with numerous pits and postholes cut into each other, as well as at least one robber trench where masonry was, shall we say, “appropriated.” What likely stood where we excavated was a timber (7th century), and later stone (pre-11th century), guardhouse or warden’s residence.

The surviving post-Conquest wall would have been about a metre higher than it stands today, but even in its ruined form one can imagine how the view we now take for granted was obscured except for those patrolling parapets. The Norman remnants, skirted by the Armstrong-era low wall, seem to stand in the footprints of at least the timber defences, if not also where late Saxon masonry would have stood. During the early Anglo-Saxon period, the site was likely palisaded and patrolled along a box rampart, a log structure filled with rubble and clay.

We reached out to some former staff members for pictures of the trench in progress that weren’t featured in the closing of the trench post, so join us for a last quick trip through the trench. 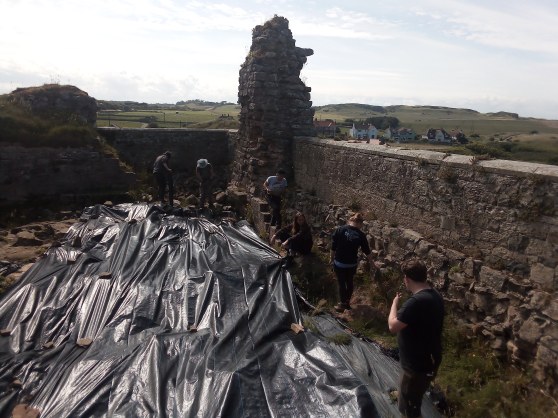 As a bonus, here is a nearly-twenty-year-old low-quality picture of our director Graeme in trench 1 that was only preserved via phone camera of a computer screen and that we had to get by diving into the darkest recesses of former staff members’ hard-drives.