Today’s Way Back artefact was certainly a bit of a head-scratcher for a while! It’s a worked bone object that was discovered in 2006 in a late medieval midden (rubbish heap). Bone and antler are very common for hand-tools going back over (at the very least) 1.5 million years of human evolutionary history, because they are quite hardy and may be sourced as a byproduct of subsistence (eat the animals, use the bones!). There is also evidence, however, that some species were not used in early tool-making communities, perhaps due to a societal taboo rather than availability. We would have to do more invasive tests to get what species this tool was made from, as there are no diagnostic shapes or blemishes that could hint at what animal it once was.

We previously looked at our blundered or practice knife handle, but this object is of a different quality of craftsmanship entirely. The object below has carving on both flat sides as well as along the edges. 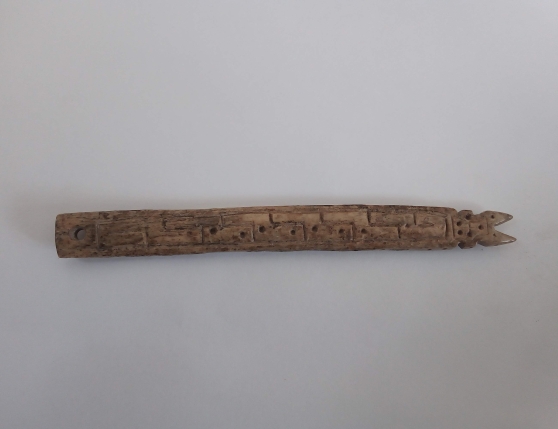 Incised dots running down the sides.

Its size and shape suggest it is also a craftworking tool, fitting neatly in one’s hand, but from what industry? Our best theory is that it’s for leather-working, as small metal tools of the rough dimensions has been used for pricking leathers and skins. Bone awls are known from sites around the world, used to work hide and even wood, so perhaps this is in a similar vein. Other uses could be associated with basket-working or thread-twisting (lucets/chain forks for knotting long cords etc), as double-pronged bone has been used in those crafts, but the scale of the prongs on our piece seems to rule out these uses. Microscopic examination could reveal more about the wear-patterns on the surface of the tines, but even from cursory examination the curve in the piece probably came from use in a stabbing or thrusting motion. There is no visible sign of twisting or torqueing, or even the constant flipping in one’s hand of a lucet. The stubby prongs also support the poking or pricking theory.

This illustration by Finds Assistant Kennedy really brings out the detail of the carving in a way that a simple photo couldn’t!

Anyway, we also cannot rule out 100% that it’s not a chip fork from an Anglo-Saxon chippy…okay we can rule that out or the Finds Team will be cross with us.